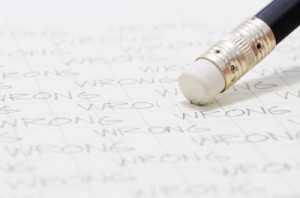 I’ve had the misfortune of being the mentor to someone who has had mentors before.  Having had a previous mentor is not a bad thing. But if that former mentor taught the mentee some bad habits, mentoring can become a bigger challenge.

Some people start out their career in negative environments. In the movie “Big” Tom Hanks plays a 12-year old in a 30-year old man’s body. He gets a job and receives his first paycheck.  Upon opening it, he lets out a scream seeing more money than he’s ever had.  His co-worker in the next cubicle (played by Jon Lovitz) mistakes it as exasperation and says “Yeah, they really screw you don’t they?” When Hanks’s character shows some ambition in his work, Lovitz character says “Listen, what’re you tryin’ to do, get us all fired? You gotta pace yourself, slowly, slowly.”

Every once in a while you find yourself mentoring someone who has been taught some bad habits and you have to “un-mentor” them.

How do you get a mentee to unlearn bad habits?

I’ve found a few things that help in turning a mentee around.

Make things positive. In most cases, I’ve found that un-mentoring is necessary when the person I’m mentoring is too negative.  Perhaps they’ve been taught like the “Big” example above. Corrective suggestions should be made in a positive light.  Pointing out that they are negative can come off as, well… negative. It’s better to make suggestions in the form of “Maybe a better way to have said that was…”

Related post: The Secret to Giving Advice As a Mentor

Find out where their head is. If you identify someone that you think could use some mentoring, it’s a good idea to determine whether they think they need mentoring. I once managed a person that I thought needed mentoring. I had made some informal suggestions throughout the year without much result. His performance review was coming up, so I thought I’d suggest meeting on a more regular basis to discuss some improvement efforts.  When he submitted his self-evaluation and rated himself a five (exceeds expectations) for every category, I knew I would have to change my approach.  He thought he was perfect.

Lead by Example. The best way to teach someone how to act is to act that way.  Much like when my father preached to me not to smoke with a cigarette in his hand, you lose credibility giving advice that you don’t even follow. If you want someone to be more positive, more ethical or to follow any other behavior, the best way to teach it is to do it yourself.

Make sure they need un-mentoring. My son has played baseball since the age of five. Although we tried to get him to try other sports, his only interest was in baseball.  This meant playing on a spring team and a different fall team every year. Even when he started playing on a travel team, he often changed teams.  Multiple teams resulted in multiple coaches.  Each new season meant a new coach trying to get him to change his batting stance or the way he blocked pitches when he caught. It would often confuse him when the spring coach taught him something that worked for him, only to have his fall coach “un-mentor” him to the way that coach like it done.

Sometimes it was a good change and sometimes it wasn’t.  There was one coach, however, that made suggestions, telling him to give an approach a fair chance and see if it worked for him.

As a mentor, that should be the standard approach, regardless of whether you’re mentoring or un-mentoring.  All advice should be optional and offered as such. If your mentee decides your advice is not for him, then maybe it isn’t.  They will either move on, or figure out over time that your advice was right after all.  It’s their decision.

4 thoughts on “When Someone Needs Un-Mentoring”