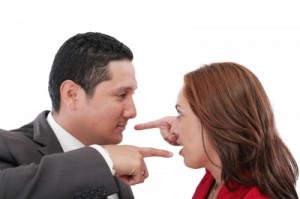 I was in a meeting with two other people the other day. They both seem to get along with each other, but the two of them couldn’t be more different from each other. For the sake of this blog I’ll call them Frank and Sam.

Frank is a very down to earth person. He asks a lot of questions. I can tell when he asks a question, he usually knows the answer – or an answer. He just wants to know the other person’s answer.

Frank often will stop in the middle of a conversation and “summarize”. He’ll say something like, “So if I understand what you’re saying, you’re suggesting that we…”

The interesting thing about that approach is that if he thinks something sounds like a stupid idea, he doesn’t just come out and say, “That’s a bad idea.” He summarizes it for the group. He’ll innocently ask a probing question like, “So if this were to happen, how would we handle it?”

He lets others in the room hear the summarization and come up with their own opinion. If he really disagrees, he may suggest a “simple tweak” and see what others think.

Sam has a much different approach. Sam always wants his idea to be adopted. When others in the meeting come up with suggestions that are different from his, he shoots holes in it. He says things like, “Well that will never work because…”

Other times, he’ll simply make the idea or the speaker – or both – look stupid. “What you’re suggesting shows a lack of understanding about the job you do.”

Reason to argue 1: To solve a problem

Frank argues a point in a meeting to solve a problem. He’s not concerned about being right. He just wants to get to the right solution. He sees himself as a facilitator. If one person comes up with a good idea, and another person enhances it, and someone else enhances it even more, the group has come up with a great solution.

If Frank thinks he has a great idea, he may continue to lobby for it. He might even be persistent. But his purpose is driven by the desire to get the right answer. If someone proves that there is a better solution, he’ll concede to that option.

Reason to argue 2: Just to be right

Sam, on the other hand, lobbies for his solution. Every once in a while, he’ll allow someone to tweak an idea of his. But he needs to be the lead dog. If everyone in the room disagrees with his opinion, then everyone here must be wrong.

Sam wins a lot of short-term battles. But he loses a lot of wars. Sometimes his decisions are a detriment to the company. They never put the company out of business. But they limit the company’s ability to grow.

He also intimidates people to the detriment of morale. They either aren’t as productive because he always shoots down their ideas, or they just quit making suggestions, knowing that the effort is futile. He also loses good people every once in a while when they figure out they can be happier somewhere else.

Most of us prefer to attend meetings where both Frank and Sam are present. We know that Frank can diffuse Sam and give him a different perspective on things. If anyone can change Sam’s mind, it’s Frank.

Deep down, I think Sam prefers Frank to be present. He knows that Frank isn’t interested in being right. And that Frank will help him reframe an idea and still make him feel like he is right.

Frank wins a lot of arguments and a lot of people. It’s amazing what we can accomplish if no one cares who gets the credit.

Why do you argue?