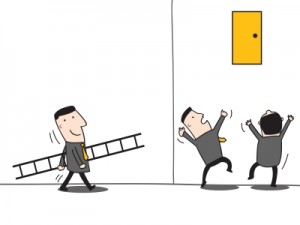 In an episode of season four of the television show The Good Wife, Alicia (Julianna Margulies)  was promoted to Partner in her law firm. Suddenly, she was in charge of the people who had been her peers within the firm.

Tensions are intensified when she is told by her senior partners to have the team reduce their billable hours for a client.

Most of us seek moving up to that next step on the corporate ladder.  It’s a sign of success and recognition for all of your hard work

It also can create an awkward situation when you suddenly go from peer to boss with your co-workers. You may deal with jealousy and animosity from your former compadres who  may feel that they were more deserving and may have been passed up for reasons other than hard work and competency.

It may also be very difficult for coworkers to view you as the boss immediately.  One day you’re one of the guys stopping for beers after work, the next day, you’re on my back asking for status reports. It can be a difficult transition for both the promoted and the left-behind.

I was put in that situation at one point in my career.  I was hired to manage a team, but it was in an industry in which I had little experience.  As a result, I was hired as a team member to “learn the ropes”.

For a six-month period, I worked as a team member trying to come up to speed on what this team did on a day-to-day basis.  Then, suddenly, the manager was fired and I (still the new guy) was promoted to manage my new and former team mates.

The first month was the most difficult. I had to deal with being the one who took over for a well-liked and respected manager.

I also had to deal with “Why him? He hardly knows our business. We taught him all he knows and then he’s catapulted into the management position?”  I’m sure there was even a little, “It’s not what you know but who you know.”

After going through this experience, I learned few dos and don’ts about this type of transition:

Being promoted to manage your peers takes the proper amount of diplomacy, authority and mentoring to deal with such a delicate situation.  If it’s handled well, there comes a time when people forget that you were just one of the guys.

I welcome your comments and criticisms.