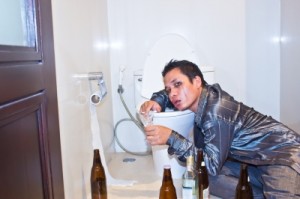 Once when I was in college, a high school friend came down for a weekend and we went out partying. In the process of excessive drinking and the crowds of college weekend binge partying, we got separated. This was in the days before cell phones, so we didn’t have any way of contacting each other. After looking for me all over, my friend (who didn’t drink much) gave up and went to his car to head to my apartment, thinking I had just gone home.

When he got to his car, he found me…passed out drunk…on the hood of his car. He poured me into the passenger seat, took me home, and helped me to bed.

The next morning, I had no memory of the incident, but we both had a good laugh as he told me about it. Except for a few friends we told the story to, it was our little secret. A couple years later, when I began interviewing for jobs in my profession, none of my prospective employers knew anything about my irresponsible behavior.

In those dark ages, not only were there no cell phones, there was no internet, and thus, no social media. If there had been, my friend most likely would have taken a quick picture of my awkward slumber with his smart phone, posted it on Facebook, Twitter, Instagram, etc., and tagged me for the whole world to see…friends, enemies, and prospective employers.

Under the hiring radar

If we had the internet when I interviewed, those companies could have done a Google search and found all kinds of information about me; including that embarrassing picture of me being an idiot.

Fortunately, all they had to go on was my resume, my interviews and the references that I provided. Today, employers have all kinds of resources on which to base their employment decisions. Many employers review each candidate’s social media accounts as a common practice.

I’m sure every company has different criteria on how they use social media to make a hiring decision, but there are some best practices anyone should follow to keep a clean social media reputation.

Limit party pictures. If a company sees a picture of you standing with your best friend with a beer in your hand, that’s probably not going to count against you unless you’re applying somewhere with strict rules. But if drinking, partying, and embarrassing pictures of you or your friends in embarrassing situations is a common theme, they may think you are too immature, irresponsible, and unprofessional to function in the business world.

Keep your politics to yourself. Most companies don’t care if you are a democrat or a republican. They want good employees. If a common source of your postings are about your political views, they may think that those views will bleed into the workplace, which could be a distraction for you and your coworkers.

Handle drama offline. Whether you think that girl is a whore or that guy is an asshole, it is one thing to tell your buddy at the bar, it’s another thing to broadcast it worldwide. Nobody is really that interested in how you were jilted, hurt and left in the middle of the night. You may want to drag that person’s name through the mud, but you end up dragging yours along with it. Taylor Swift makes a lot of money writing songs about that crap, but she probably wouldn’t get hired in the business world.

Racist jokes make you look like a racist. You may think that a joke about a stereotype of a minority is funny and simply points out the stupidity of bigotry. But posting those jokes on an international medium will only make people associate that stupidity with you.

As you were growing up, somebody may have told you not to worry about what people think. That’s sound advice, but it has to be tempered with how your behavior reflects on your personal brand for a potential employer.

National brands like Coca Cola and Nike work diligently to protect their brands against negative publicity. They want to limit any negative connotations to their product. That’s probably why you never see the official soft drink of the Democratic Party. It’s also why alcoholic beverages promote responsible use when they advertise. (You probably wondered why their commercials didn’t show people passed out drunk on the hoods of cars.)

You have to be yourself

Pretending to be someone else to impress an employer may get you the job, but the mismatch will become evident soon and it probably won’t work out for long. Most employers don’t care what you do on your own time as long as it doesn’t affect your performance on your job. If they see you publicizing all of your bad habits, they may think that your bad behavior will end up affecting your job.

Having bad behaviors is not necessarily a bad thing. Publicizing them can be. Personal branding is not about misleading people about who you are. It is about portraying yourself in the most positive light possible. Like Coke, be the real thing.

How has social media cost you a job in the past?

https://media.blubrry.com/regional_business/p/content.blubrry.com/regional_business/CPS-029-121220-LewSauder-SocialMedia.mp3Podcast: Play in new window | Download (Duration: 35:17 — 48.7MB) | Embed It is hard to imagine life before the internet came along. To the current generation that has recently entered – or is planning to enter – the work world, they have never known a world without it. They have seen it evolve […] Continue reading →