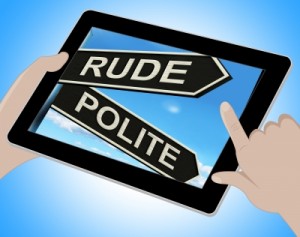 Respect in the Workplace

I once knew a woman who was in a bad relationship. I never met her significant other, but she made random comments about how poorly he treated her. The interesting – and significant – thing was that she didn’t make these comments to complain about his behavior. They were stated in a matter-of-fact manner that indicated that she almost thought it was normal.

She never indicated that there was ever any physical abuse. It was more a matter of disrespect. His activities and friends came first. He came home from drinks after work when he was good and ready. She was obviously a secondary player in this relationship.
It bothered me because she was a friend that I cared about. It got me to thinking about the importance of respect in the workplace.

There was a day when the hierarchy in the business world was iron clad. The higher up you were in the org chart, the more authority you had. Authority indicated respect. Respect flowed up. Condescension flowed down.

If you want a good example, watch an episode or two of Mad Men. This 1960s-based TV show provides a good example of how bosses treated those below them. They used bullying tactics on their underlings to invoke fear. Back then, people didn’t change jobs as regularly as people do today. Lower level workers feared for their jobs and would submit themselves to the abuse their bosses inflicted on them. Power was everything.

In today’s world, it’s a little different; probably not as much as some would like, but different. Women and minorities have a higher stature, if not equal.

One of the biggest differences is that employees are more transient. For one thing, workers are not indentured by a pension. Many companies of the past knew that employees wouldn’t risk losing their pension if they didn’t stay the required 20 years. The trend towards 401(k) personal retirement savings accounts removed the burden of pensions from the company. At the same time, it freed employees to move on to flee a company if they wished.

It also became less of a stigma to change jobs every few years. Back in the day, someone was considered a “job hopper” if they changed jobs a lot. Now, it may be more of a stigma if someone stays in a job too long.

For some, respect is natural. Like a Geiko commercial, it’s just what you do. But for those bosses for whom respect does not come naturally, there are business reasons that should influence you to show respect for others.

Respect Lower-level employees – Today, the fear of losing one’s job may have transferred to the employer. Baby boomers are retiring. The economy is expanding. Unemployment continues to go down. Technology, finance, and healthcare are hot areas. The economy is increasingly knowledge-based. Employers should fear their valuable knowledge worker bolting for a better opportunity.

If you, as a boss, can’t respect an employee for who he or she is, at least respect the value that employee adds to your organization.

Respect your boss – Perhaps your boss doesn’t treat you with respect. Maybe he or she is not competent for that position. If these are serious situations that infringe on your ability to do your job effectively, you may need to make a change.

But if your boss is simply difficult to get along with, you can still respect him or her. The higher one moves up in that hierarchy, the more responsibility that person has. This may cause them to make difficult decisions that affect you or the people you like. They may have to make unpopular decisions as a result of their responsibilities.

You don’t have to like your boss. But you can respect them for the difficult job responsibilities they have.

Respect your coworkers – That woman smacks her gum. The guy in the cubicle next to you talks too much. You could respond by being rude to them or giving them the cold shoulder. But at some point, you have to work together.

You can focus on the negative quirks that others have and allow it to ruin the enjoyment of your job. Or, you can overlook that and find the best in people. You don’t have to be every coworker’s best friend to treat them with respect. You may have as many peculiarities as you see in them. As a professional, you are there to get a job done and help the company succeed, not to have a social group.

Respect your customers – Some people joke about how much work they could get done if the customers didn’t get in the way. It’s a great irony that points out that the customer is the true reason we are all working.

Everyone has overhead, or background work that the customer never sees but needs to get done. That side work may or may not be directly related to serving the customer, but the customer is the reason we are all in business. We need to respect them to keep them coming back.

Respect yourself – Perhaps the most important thing is to respect ourselves. We are often the person we think of last. Like the woman I knew with the boyfriend, he may have disrespected her, but it was perpetuated by her allowing it.

When people at work disrespect us, it is up to us – in a respectful way – to push back and stop allowing it. If it persists, there may be ways of elevating the issue to people with more influence. If those options have been exhausted, it may be that you are in a toxic environment. The best bet in that case is to leave. But your next job will likely still have disrespectful people. At some point, you have to learn when to fight, when to endure, and when to flee.

One of the most important aspects of leadership is leaving your ego at the door. Bosses who are more interested in demonstrating their authority than advancing the organization’s goals show a lack of leadership. Leadership is everyone’s responsibility. Showing respect in the workplace is a leadership skill. It shows you are willing to put up with people you may not like in order to help the organization succeed.

Do you work in a respectful environment?