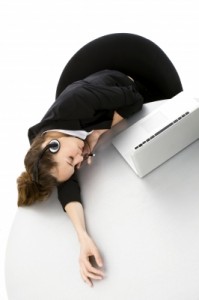 When your team is not performing

“What the hell is he doing all day?”

That’s what we want to ask when we start seeing limited output from a team. It can be even worse when the worker is remote. Whether it is a team member, a small cluster of the team, or most of them, many times we think about what is wrong with the individual.

There may be an issue with one individual. It may affect his or her own performance, or poison the whole team. A good leader asks the right questions to determine the root cause of the problem.

Is it a training issue?

I waited tables to pay my way through college. At one restaurant where I worked, they didn’t train people. They just gave them an order pad and a menu and told them to go start waiting on people. Their rationale was that if you’ve been out to eat before, you should know how to wait on a table.

But going out to eat doesn’t teach you to learn all the aspects of the menu, or to know what side items come with what entrees. Some people figured it out and others failed, either quitting in frustration or getting fired. Both outcomes were more painful than they needed to be.

People can only perform to the limit of their knowledge. If people are underperforming on your team, stop to address whether you equipped them with the tools and knowledge to do their job effectively.

It surprises me how many people lie on their resumes to get a job, hoping that they can figure the job out before anyone knows they are a fraud. It is important to do adequate screening during the hiring process to verify that the person is who they say they are. This includes asking questions that require the candidate to explain what they did, how they did it, and how it gave them the experience they state on the resume.

In other cases, people who are successful in one position get promoted to a higher level. A top performing sales rep gets promoted to manage the sales team. Not only have you lost your best sales person, she may not be equipped to manage a team. It’s a completely different set of skills. You may lose performance from your entire team.

Leadership is not something you can learn in a classroom or from a book. You can learn aspects of leadership from those sources, but experience is the greatest way to learn leadership. People need to be eased in to such positions.

Is it a motivation issue?

In other situations, they may feel they are stuck in a dead end job. If there is no hope for a promotion or a bonus recognizing their accomplishments, they won’t feel the need to accomplish anything. Work becomes a daily grind of surviving until quitting time rather than a career with personal growth.

For more information see How to Mentor for Maximum Benefit

Are there personal issues?

You may ask your people to leave their personal problems at the door. We have a business to run. But life happens. People have marital problems, sick children, and sick parents. Some issues may be self-inflicted such as an alcohol problem. Regardless of the cause, they are dealing with the effect.

If someone on your team demonstrates inconsistent behavior, it may be the result of a personal issue. New age HR policies require managers and leaders to be cautious around asking about these types of issues. But before taking serious action against an employee for performance, a little empathy may be in order to determine the cause.

Are they assigned to the right tasks?

Albert Einstein famously said, “Everybody is a Genius. But If You Judge a Fish by Its Ability to Climb a Tree, It Will Live Its Whole Life Believing that It is Stupid.” A agree with the great scientist. Everyone has their niche where they could be successful. That strength may not make them as much money as what they are doing. A manager needs to understand that. But there are many people with left-sided brains doing right-sided work and vice-versa.

Have you given this person a fair shake? If you inherited this person from your predecessor, maybe you have already decided that you wouldn’t have hired her. Most people recognize that and it will affect their performance.

Do you keep them focused? If you assign someone a task and then interrupt them every half-hour to check their status or to distract them with other tasks, they may have trouble keeping their attention on the task at hand.

After asking these questions and determining the root cause of the issue, you are faced with four basic options.

If they are failing because they don’t have the tools, you may want to address ways to provide them with the proper tools. Determine whether they need classroom training or one-on-one mentoring. Maybe they need to get experience on a smaller scale or just a little more time doing what they are doing.

Training is only an option if they are trainable. If they don’t accept that they need training or they see it as an embarrassment in front of the team, they won’t be receptive to it. It will be a waste of time and money in this case. Training will fail if learning is absent.

If your fish has been trying unsuccessfully to climb a tree, maybe it’s time to find her a stream. Not every organization has this luxury. If someone has a more artsy mind and all you have is scientific jobs, you may not have many options. But if you can find a different position where they will be more productive and happier, it will be a win-win situation for all.

If your organization’s HR department requires you to put them on a performance improvement plan, do it immediately. It may result in better performance. It may give them the hint they need and they will leave on their own. If they don’t quit and they don’t improve, you need to do everyone a favor and end the relationship. It may be hard. They may be hurt or angry. But everyone will get over it and move on.

This is the easiest thing to do and probably the worst option. Everyone goes through a temporary rough time where their performance takes a hit. They may just need time to bounce back. But if poor performance runs for an extended period of time and management doesn’t do anything about it, it usually gets worse.

It is important not to overreact, but by doing nothing about poor performance, you risk the jobs and careers of everyone involved, including your own.

High performance growth, by individuals or teams – is not a constant upward trend. People have bad days, teams have bad quarters. A strong leader needs to assess whether performance dips are a temporary anomaly, or a serious issue that needs to be address.

Asking the right questions to determine that root cause and taking the correct actions to stem the poor performance are what separates managers from true leaders.

How have you addressed poor performance on your team?

Image courtesy of Ambro at FreeDigitalPhotos.net