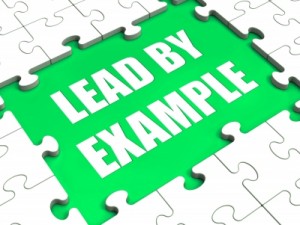 I once worked for someone that touted his leadership skills. He gave good advice on leadership. He just didn’t follow it himself all that often. His hypocrisy didn’t go unnoticed. He would give advice – pretty good advice actually. Yet, people would laugh at him behind his back. His advice didn’t have credibility because he didn’t have credibility.

He tried to lead by sermon and didn’t lead by example. Here are eight ways a leader can be more credible and effective with a lead by example approach.

I once had a manager who made a regular habit of lying to the client. There were times when he suggested his employees lie to them. It didn’t take long for us to realize that if he could so easily lie to the client, he would most likely lie to us employees also. It became a joke behind his back that whatever he said was probably a lie. We would bet on what the actual story was.

His lack of honesty cost him the credibility required to be a respected leader.

2 Admit when you are wrong

Nobody is right all the time. You know it. I know it. And the person who never admits that he’s wrong knows it. Ironically, there are people who think that if they admit that they are wrong, it will erode their credibility as a leader.

The opposite is, in fact, true. When someone is wrong, most people know it whether you admit it or not. People who admit they are wrong are usually more respected and more likely to be seen as a leader than someone who claims to be right all of the time.

Related post: Mentor is a verb, not a noun

Great leaders view the organizational structure as an inverted hierarchy. They see themselves at the bottom supporting everyone on their team. In fact, they are so busy supporting their team, removing obstacles to help them get their jobs done, that they don’t have time to talk about leadership. People recognize that leaders are leaders. They don’t have to be told.

When a leader supports his or her team, they take the focus off of themselves and focus on the team.

Once one moves high enough up the corporate ladder to get his own office, he begins thinking that the title and office make him a leader. He doesn’t have time to deal with all of the questions and interruptions of those below him. He closes his door so he can get some leadership done. This type of leader spends a lot of time in the office rather than with the team.

When this happens, they lose touch with what is going on. They aren’t close enough to hear issues that come up day to day and don’t have regular conversations with the team to be up to date on what is going on.

A leader wants to be close to the team to be aware of issues and how things are progressing. Being accessible to the team helps the team get things done more efficiently, which makes a leader more effective.

5 Be disciplined in your decision making

A good leader doesn’t shy away from difficult decisions. Some decisions will be unpopular. Rather than worrying about how he will be perceived, he makes the tough decision and then communicates it to the team in the most diplomatic manner possible.

Not everyone will like the decision. Some will show their dissatisfaction to the leader. The leader needs to stand tough and claim responsibility for the decision rather than pass the blame to someone else.

A good leader is flexible and open to new ideas from anyone on the team. She focuses not on her own ideas getting implemented, but the best solution for the team. The next time you find yourself arguing with someone over an idea, ask yourself, are you arguing for the right answer, or are you arguing to make your answer right?

7 Have the Difficult Conversations

In addition to making difficult decisions, a good leader is not afraid to have the difficult conversations that need to be held with team members. If a team member is habitually late or demonstrates a performance issue, a leader has a private conversation to work with them, mentor them, and help them correct the behavior. Few people like to be told they are doing something wrong. But a diplomatic conversation, made with the intent to help the person, may make it easier to swallow.

Regardless of how diplomatic the approach is, conversations like this can become confrontational. A leader must confront an issue head on despite the uncomfortable situation.

It is sometimes easy to make decisions – or to put them off – because it won’t affect the short term circumstances. Some people lead only considering the here and now. Leadership is a strategic discipline. Tactical decisions have to be made, but the long-term strategic goals should always be considered.

Being a leader and a mentor is not always a series of meetings or a regular flow of advice. Leadership is most often done by example. That is something that is obvious to everyone except the leader.

Have you ever had a “leader” who set a bad example?